Migraines and Hormones — What’s the Connection?

Migraines and Hormones — What’s the Connection? 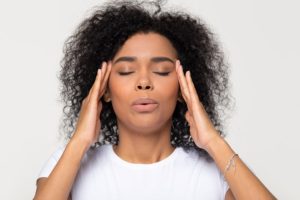 Helping people with migraines can be tough as an upper cervical chiropractor in Dublin, CA. Migraines are a frequent complaint of patients because migraines bring about unpleasant symptoms such as extreme headache, dizziness, sensory sensitivity (lights, odors, and sounds), nausea, and vomiting. The pain lasts for hours to days and can make a person bedridden until the migraine goes away.

Some people have an aura, or visual disturbances, that serves as a warning sign before the headache. The aura can include blind spots, flashes of light, and other vision changes. Auras can also involve sensory or motor disturbances such as numbness or muscle weakness.

Age of Onset of Migraines

The onset of migraines happens before age 40 to about 90% of people. In general, a migraine episode often occurs for the first time during the teens or early 20s. Migraines hardly ever start late in life. Some patients even say their migraines become less intense and less frequent, or even stop altogether, by the age of 50.

The Role of Hormones in Migraines

Hormones always belong on the long list of migraine triggers. Studies show that more women experience migraines than men, and one reason for this is their fluctuating hormone levels. During menstruation or pregnancy, women experience a decrease in their estrogen levels and fluctuating hormones, resulting in a higher chance of developing migraines.

As many as 50% of women who live with migraines report that their migraines have some connection to their menstrual cycle. It’s no wonder there is such a thing as “menstrual migraines” that occur during menstruation or within the two following calendar days. This type of migraine involves the entire cycle that leads to physical and psychological changes in a woman’s body, not just the period. The two main sex hormones — estrogen and progesterone — combined with the chemical changes happening during their production can have a great impact on the body.

To learn more about the connection between head and neck injuries and migraines, download our complimentary e-book.

In general, women become less fertile during their 40s, when the ovaries slowly stop producing eggs every month. Perimenopause is the stage when a female’s period starts to arrive irregularly until the periods stop altogether. Menopause is the stage when the period ceases completely. Menopause can happen anytime between the ages of 40 to 60 years, although the majority of women hit this stage around the age of 51.

The ovaries are generating less estrogen during perimenopause, and the hormonal changes can result in migraines. According to a study, about 45% of women experienced worse migraines during menopause. On the other hand, 15% of women had less severe migraines.

The hormone cycle persists for some more years after a woman’s last period. Hormones may not be enough to cause menstruation, but they can still cause migraines. Fortunately, this ends after 2 to 5 years.

Coping with migraines during menopause can be difficult for women as the irregularity of the menstrual cycle increases its unpredictability. Most women endure the inability to sleep due to hot flashes and night sweats. This contributes even more to heightened stress levels, which can also cause migraines.

One recommendation I give to my migraine patients as an upper cervical chiropractor in Dublin, CA, is to keep a migraine diary. This can help women identify whether their episodes are related to periods or other menstrual symptoms. It will be beneficial to go back to the entries in your diary and figure out if a pattern is developing. Keep track of these other trigger factors as well:

You may learn that one of these has more to do with triggering migraines than your menstrual cycle. Discuss with your doctor the personal triggers you have identified through your migraine diary and avoid them completely to have fewer and less severe migraines.

The top two bones in the spine (C1 and C2 vertebrae) are responsible for protecting the brainstem against damage. The brainstem is a critical part of the central nervous system as it enables all kinds of involuntary functions in the body, including breathing and digestion. Our brains may have control over these functions, but it is the brainstem that allows the automation of these actions, so we don’t need to think about them or ask the brain to keep doing them.

The Link Between Menstrual Migraines and Spinal Misalignment

The brainstem also manages the regulation of the hormones. If the brainstem experiences malfunction, migraines associated to hormone production can develop. This brings us to the link between migraines and a misalignment in the bones of the upper cervical spine.

If the C1 and C2 vertebrae move out of alignment, the brainstem comes under pressure, causing the improper sending of signals to the brain. This has far-reaching effects on the entire body, including irregularity in hormone production.

Upper cervical chiropractors like myself use a gentle technique to correct upper cervical misalignment. We only use low force to encourage the bones to return to their original place naturally. It is an effective and research-approved therapy. A study observed 101 migraine patients who all received upper cervical adjustments. After the upper cervical chiropractic care, nearly all patients reported a reduction in the severity and frequency of their migraines. Call 925-281-3889 or schedule a consultation with me to learn how to attain the same results for yourself.