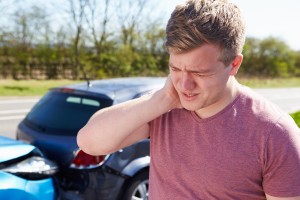 When you experience Whiplash, there is a chance you might also experience a Whiplash Associated Disorders called Coup Contrecoup Injury that effects your Cerebrum. What’s the Cerebrum? That’s the part of the brain just beneath your skull, which you’ve probably seen models of in science class or at doctors’ offices. It contains several components, and it plays a huge role in controlling the Central Nervous System.

What’s in your Cerebrum?

A coup injury happens below the site of impact to your head, and a Contrecoup Injury happens on the side of your head opposite the site of impact. Both of these injuries can happen apart from each other or at the same time, and they occur when the brain collides against the skull due to a sudden deceleration caused by an impact. It is also possible, depending on the rate of speed and the force of the acceleration-deceleration, such as with Bungee Jumping and Shaken Baby Syndrome, for Coup Contrecoup Injuries to occur without an outside object of impact.

If you were recently rear-ended and your head hit the steering wheel, dashboard, the back of the seat, or the windshield your Cerebrum may have been injured. Even if you experienced whiplash due to a sports injury, a fall, or any other impact from behind that led to you hitting your head, then there is a good chance your Cerebrum was bruised and that led to Coup Contrecoup Injury.

If your Cerebrum was bruised and one of the above mentioned parts of your brain was damaged, then your everyday life will be effected. A brain injury of this type that is not examined could lead to memory loss, learning disorders, vertigo, migraine headaches, emotional and behavioral problems, or more.

In order for your brain to heal from this type of injury it must get the proper amount of blood and cerebrospinal fluid. Frequently during a head or neck injury a misalignment occurs in the bones in the upper neck. This upper neck misalignment can lead to a variety of issues including affecting the normal flow of blood and cerebrospinal fluid to from and through your brain. This undetected brainstem injury is a frequent cause of lingering symptoms following a whiplash, concussion or other head and neck injury.
To find a Doctor in your area go to www.NUCCA.org or if you are in the Dublin, California area to schedule your NUCCA evaluation, click the button below:

Dr. Andrea Pritchett of Vital Life Wellness Center in Dublin, California is an Dublin Chiropractor and Upper Cervical Expert trained by the National Upper Cervical Chiropractic Association (NUCCA). Her upper cervical clinic also serves Pleasanton, Livermore, San Ramon and Danville. She is uniquely trained to correct problems in the upper cervical spine (upper neck). This vital area is intimately connected to the central nervous system and problems in this area have been shown to be an underlying cause of a variety of different health problems, including children’s conditions such as ear infections, colic and scoliosis and problems that adults face including migraines and other headaches, fibromyalgia, sciatica, neck and back pain, and more. More information can be found on our website at https://www.vlifewellness.com/